A Psychological Analysis of The Office’s “Dinner Party”

Jan thinks Hunter is very talented. You know what? I don’t think he’s that good.

I won’t lie. After I watched “Dinner Party” for the first time, I scoured the internet for hours in hopes of finding a legitimate essay about this episode. I mean, every aspect of it is utterly fascinating and layered with ingenious comedy, so why wouldn’t somebody write that?

As someone who has proudly seen The Office in its entirely three times, I can safely say that 1) I don’t have a social life, and 2) I have a decent understanding of the characters on the show. Part of The Office’s beauty rests in the character development- most notably in Michael, Jan, Angela, and, of course, Jim and Pam.

I was a little horrified (but later entranced) by Jan Levinson’s slow descending into madness. She started off emotionally strong and even somewhat sane, compared to the other characters, in seasons 1 & 2. Her strong dislike of Michael Scott is justified and understandable (the man was and  always will be a nutcase), so why does her opinion of him do a complete 180 from season 3 onward? These are the big questions in life I need answers to. 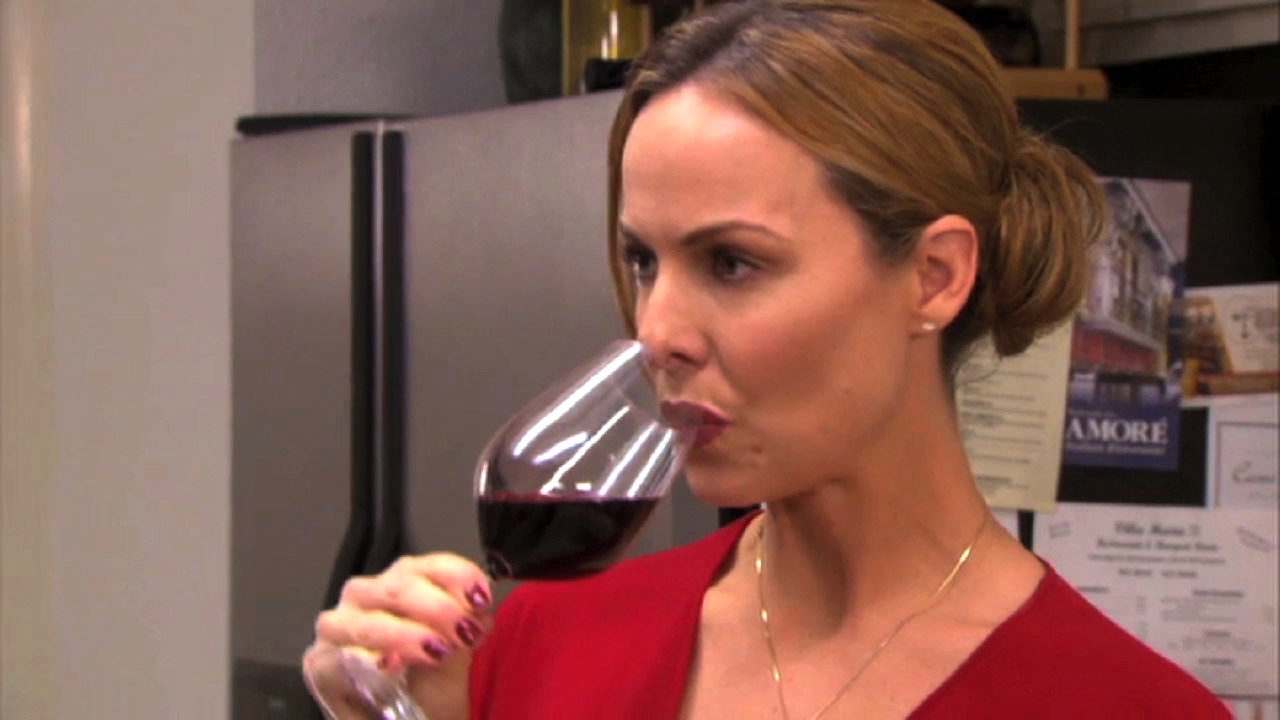 As we all know, it is the cringe-worthy uncomfortable humor of The Office that makes it absolutely magical. And “Dinner Party” is really one of those golden highlights- “Oh yeah, this is why I love the show so much!” It’s a turning point in Michael’s life, on top of being a turning point for the viewers as a whole. And so our story begins at the infamous Michael Scott condo, following a questionable overtime assignment from corporate.

The strain of Jan and Michael’s relationship is conspicuous within the first two minutes of the party. Thankfully, we have the overwhelming normalcy of Jim and Pam’s present so you can’t ignore how painfully awkward the hosts are. The constant weird touching and pet names exchanged between Jan and Michael quite literally last from beginning to end, even after the climax.

I’m now beginning to understand why Jim turned down this dinner invitation nine times. Michael’s overpowering craving to please a woman (and Jan’s obsession with being craved) immediately creates an awkward tension between the two. For the first time in the history of the show, I actually found myself feeling sorry for Michael Scott.

Jan’s dominance in the relationship is literally sprinkled throughout the entire condo. One of my favorite moments of the entire episode is when Jim and Pam discover that Michael sleeps on the world’s tiniest bench due to Jan’s “space issues.” And then, later on the tour of the condo, Jan is sure to bombard her guests with pride in her candle-making space and personal luxuries. Michael, on the other hand, can only take comfort in his laughably measly “two-hundred dollar plasma screen TV.” I began to view Michael’s insistence on Jim and Pam coming for dinner as a cry for help, rather than a simple act of courtesy. I mean, who wouldn’t if they had to share such a small space with Jan Levinson? 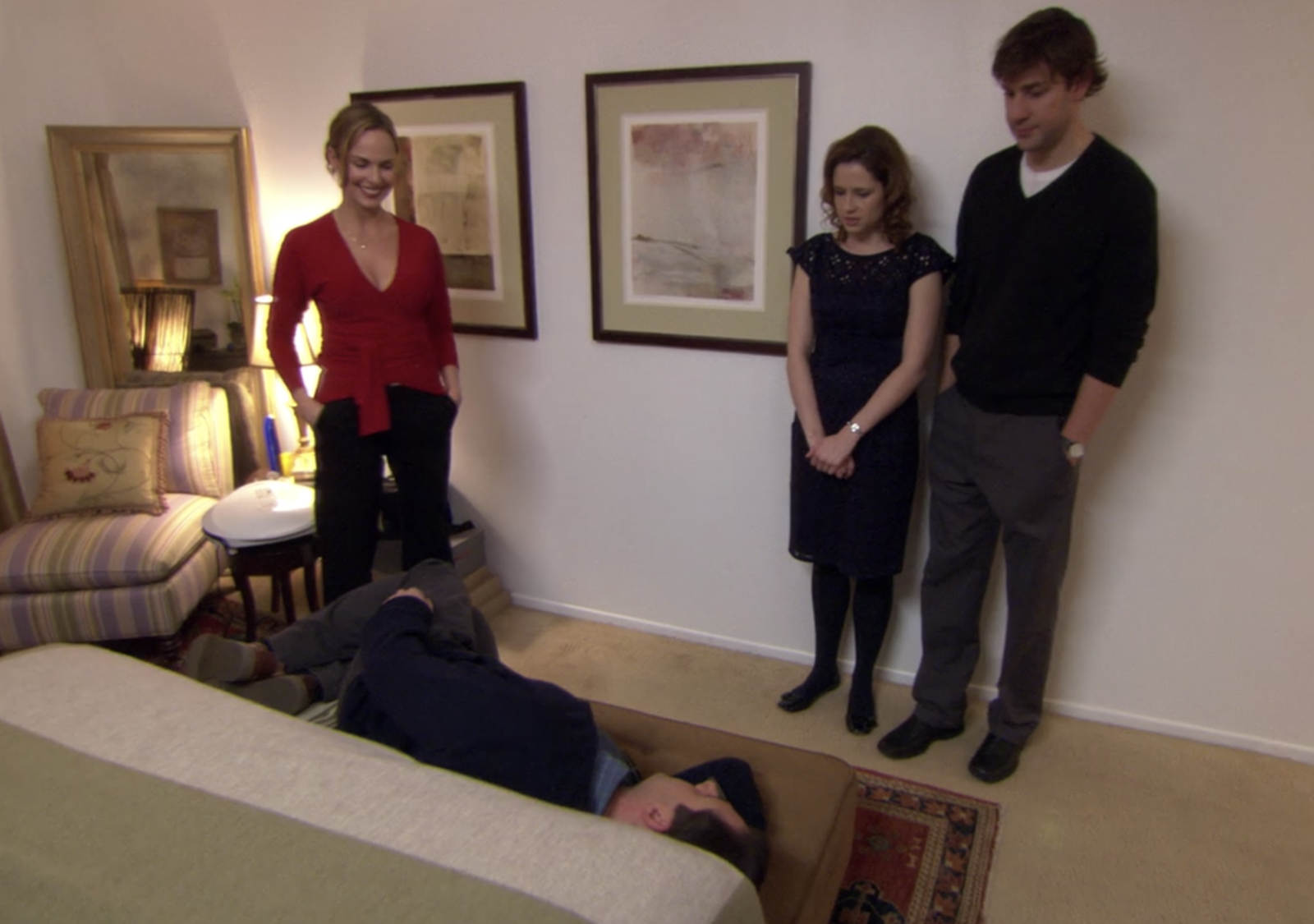 Jan is obsessed with dominance. We’re not quite sure why- is it because she feels discarded from her prized workplace at Dunder Mifflin, her failed first marriage, or something else that digs even deeper? I couldn’t help (through my laughter) feeling pretty sorry for the both of them. And Michael, bless his stupid soul, truly feels that he is getting some sort of love in return from Jan. I’m assuming here that his broken family life in his early years have turned him into the submissive, affection-craving version of himself that we see in “Dinner Party.” Jan’s moderately creepy passion for Hunter the ex-assistant clearly doesn’t help either. Michael subsequently only feels more crazy for Jan’s attention once she puts on the infamous jam, “That One Night” (a song that I can only describe as overtly sexual and clearly about a past experience between Jan and Hunter.)

Another little side-story I enjoyed in this episode was Jan’s delusional belief that Pam and Michael once did something “resembling dating.” Jan clearly sees Pam as a threat, somebody whom Michael trusts and confides in. Jan even undergoes a dramatic boob job in a prior episode (maybe to one-up Pam and her pam-pams?). Jan’s accusations towards Pam, albeit uncomfortable to watch, reveal so much more about Jan’s ridiculous jealousy of other women. Even Angela gets in on the drama, but we all expected that, right?

At this point, we’re about halfway done with the episode, but the fun doesn’t stop here. The beloved Dwight Schrute and his “purely carnal” formal babysitter have now joined the party, much to Jan’s dismay. Angered that the power in the relationship has been taken away from her, she accuses Michael of always getting his way. And, because there’s no way for me to explain Michael’s response without including full context, I’ll just drop it here:

“When I said that I wanted to have kids and you said that you wanted me to have a vasectomy, what did I do? And then, when you said that you might want to have kids and I wasn’t so sure? Who had the vasectomy reversed? And then when you said you definitely didn’t wanna have kids? Who had is reversed back! Snip snap snip snap snip snap! I did! You have no idea the physical toll that three vasectomies have on a person. And I bought the condo, to fill will children!”

Yeah, if you hadn’t already grasped the severity of Jan and Michael’s f*cked-up relationship, you definitely did now.

Throughout the night, tensions between Michael and Jan only worsen. In what appears to be a bold attempt to take back his dominance, Michael retrieves his neon St. Pauli beer sign and places it directly in the dining room during dinner. Jan fires back by yet again blasting Hunter’s love warble. And so begins one of the most violently dramatic encounters of the entire show: Jan vigorously hurls one of Michael’s prized dundies at his television and cracks the plasma screen.

As painful as the scene is to watch, you can’t help but feel happy that Jan and Michael are finally being brutally honest with each other. The physical destruction of their home mirrors the dissolving of their foundation as a couple- especially in the final shot when Jan is trying to glue back together the broken dundie. She wishes she could salvage her power over Michael, but it’s no use- he’s long gone from her now.

The final moments of the episode show turn their attention to the other couples of The Office. In true Jim Halpert nature, he steals Hunter’s CD and plays it in the car for a delighted Pam. Andy attempts to flirt with Angela, per usual, but just ends up with ice cream smeared across his car. And Michael goes to stay with Dwight for the night- yet another example of Dwight’s undying devotion to his boss.

It’s amazing how much self-destruction you can watch two characters go through in only twenty minutes. That’s just the power of The Office, I guess- several small slapstick moments coming together to form one giant beautiful tale.

Coming up next: What’s in Season in the Month of November?