Beyond the Barracks: A Discussion with a Female PFC 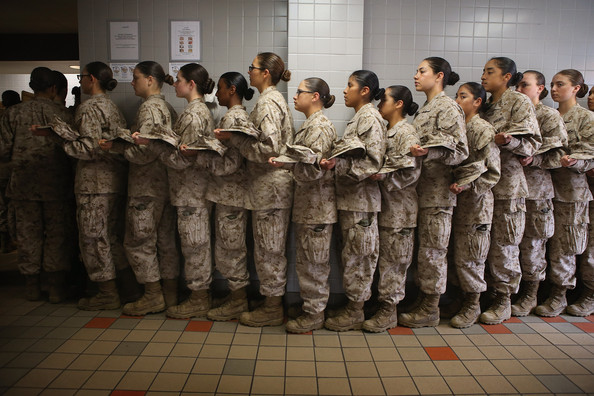 Over the weekend, I had the opportunity to conduct an email-interview with Audrey Hopkinson, a lovely young lady and member of the United States Marine Corps. Shockingly, women only make up seven percent, or 14,000, of the US Marine Corps. In total, women represent sixteen percent of the enlisted forces. Below, PFC Hopkinson answered some of my burning questions about what it’s really like to be a woman serving in the military, and how she has learned to a lifestyle many of us are unequipped with.

Diplomat’s Digest: To start from the beginning, what field/division of the military are you in, and what is your title?

DD: How did you know what branch of the military you wanted to work in?

AH: My older brother, Matthew, was also a marine.

DD:Was there a particular age at which you knew this was what you wanted to do as a career?

AH: I thought about joining all through high school in 2016, but ended up doing a semester in college before I joined in May 2017.

DD: How did your family react to your decision?

AH: My family was extremely supportive; we’re a big military family so it wasn’t a very surprising decision.

DD: How often are you able to visit home, and are there specific conditions that must apply for you to be able to visit?

AH: Each year we get 30 days of leave (2.5) a month, so depending on how much leave you accrue, you can take it whenever. It takes about 2 weeks to be approved unless there was an “emergency” by their standards, to come home right away. When you come home you still have to conduct yourself as a marine. We have civilian attire regulations, and we still have to abide by all the usual rules.

DD: Were there any aspects of the military that made you reluctant to join?

AH: Being away from home kind of scared me, but also excited me. The discipline was also tough for me, conforming to this big organization when I had always been told to “be myself”, “be who I wanted”. When you join the military, you’re no longer an individual, you belong to the government, and you’re apart of something much bigger than yourself, and much more important.

DD: What are some of your favorite countries that you have visited while being in the military?

AH: I’ve been to Japan and Korea. Korea was more for vacation, although heavily populated by the US military. But it was an amazing experience & by far the most fun place I’ve ever been. Japan is also so beautiful, and has really given me such an amazing outlook on life. Its given me a much bigger picture of the world because I had only known America my whole life. It sort of takes you back to realize American values aren’t necessarily the “right” way or the “only” way.

DD: To any extent, have you ever experienced sexism while in the military?

AH: There’s absolutely sexism. There’s sexism everywhere, but of course with the military, mostly marine corps, being primarily male dominated, females are treated differently, in negative and positive ways. One negative way would be that we have a huge stereotype of the “typical female Marine”, usually something like “butch” or “sexually promiscuous” also we can be seen as the “weakest link” because we have different physical fitness standards. But females are also looked at more for promotion and progression through the Marine Corps and the military because there are so few, and they definitely want females in higher positions to add diversity to leadership. Females are also given a lot more trust and privacy, they are very careful about making females comfortable, because we are usually surrounded by men.

DD: Has being in the military given you more educational opportunities for the future?

AH: Since my job field is Air Traffic Control, during my schoolhouse training I became FAA certified (federal aviation administration), so when I get out of the Marine Corps, I can work for the FAA or DOD as a civilian air traffic controller. As active duty members we are also given tuition assistance to further education during our time in the military. We are also granted the Post 911 GI Bill which covers a college degree after the military as well.

DD: How much recreational time are you given, when not on duty, to explore the country/state you are in?

AH: We are surprisingly given a lot of “liberty”, as we call it. I work 8 hour shifts 5 days a week, and aside from physical fitness training which usually runs about an hour, or extra duties we may receive occasionally, we are given the rest of our days to do what we like within military standards. We can go out in town, and enjoy ourselves how we please.

DD: Have you had a difficult time making and keeping friendships in the military?

AH: Definitely not, and I don’t believe anyone has a hard time making friends. The military brings together people from all different backgrounds, states (even countries sometimes), and gives us something in common. We all come together to serve and protect the freedoms of our fellow US citizens. I have become friends with people I would never imagine even conversing with as a civilian. Its given me such a great insight into the lives of others, and given me a no judgment motto in my own life for sure.

DD: Is housing in the military consistent, or are your sleeping quarters constantly changing?

AH: We live in barracks with a roommate, when you’re at your duty station you’re given a room and you stay there for as long as your orders permit you to be at that particular base. You’re usually stationed in one place for 2-3 years. But of course if you were sent on a deployment, you will sleep in other places during your deployment and then come back home to your barracks room. They are comparable to college dorm rooms.

DD: What has been the proudest moment for you as a member of the military?

AH: Probably the proudest moment for me has been at the Marine Corps Birthday Ball. You know, we all rag on being in the military, we complain and fuss about the crap we have to go through and deal with on a daily basis, but we all come together on November 10th, and we give all our love and passion to the corps. Deep down, we love being a part of this big “gun club”. We all “go through the suck”, as we say, together and we enjoy feeling like the biggest badasses in the world. We watch our leaders give us motivating speeches and tell us to keep fighting on, and we remember all the marines who have come before us and that will come after us. We listen to the “Marine Corps Hymn”, have a cake cutting ceremony between the oldest & youngest marines present, and we all drink and dance the night away together and just enjoy wearing our uniform. So my proudest moment is seeing every marine in my unit with a smile on their face singing the hymn, and just glowing in their dress blue uniform, no matter how much we hate it during our work week.

DD: What do you think your future holds for you after you complete your military duty? Where would you like to see yourself in five years?

AH: After my five-year contract I will be getting out, and after completing my bachelors degree using tuition assistance I’ll be using my GI Bill to pursue a masters degree, maybe law degree. While also working as a DOD or FAA air traffic controller.

DD: What advice would you give to people who are curious about joining?

AH: 1, Remember that when you make this decision, you are no longer doing things for yourself, you’re joining to give back to this amazing country that has allowed you to keep your birthright freedoms. Nothing is about you anymore, you have no more room to be selfish, and becoming a better person should excite you. 2, If you find yourself on a bus to Parris Island, or wherever you may go depending on branch, etc. DO NOT GIVE UP. They will test your limits, they’ll push you to the brink, but its only to make you a better person, and to make you mentally and physically stronger. 3, Soak in all the comradery, and be extremely observant & analytical about every task given. You’ll understand that every single thing has a reason and a purpose even when it doesn’t make sense to you. There’s always a bigger purpose.  ❖