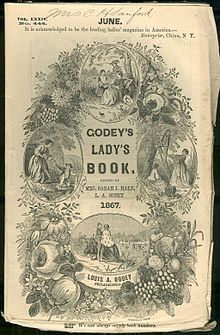 Something I’ve been wanting to do on my blog for quite a while is start a different mini-series for every month of the year. I already have series ideas planned up to March, but we’ll keep those ones a surprise ;). For the month of January, I am going to be producing “Fashion History Friday,” a series that focuses on interesting factoids and fashions of the past. The first thing I want to talk about is something called the Godey’s Lady’s Book, which ran from 1830 to 1878.

Published by Louis A. Godey, the Godey’s Lady’s Book was the first successful women’s monthly magazine in America. Inspired by “gift books” for women, Godey decided to put his own spin on things and further market the “gift book”. Each Godey’s magazine contained poetry, articles, and engravings, and proudly had a woman editor, Sara Josepha Hale, for forty years. Most of the artwork in the Godey’s book was hand-painted, which made it rather expensive at the time (a whole $3 per magazine)!

I first became familiar with Godey’s Lady’s Book in a fashion history class I took last semester in college, and since then, it has stuck with me. My professor even brought out some original Godey’s books that she had collected in our historical archive, so we could see the real hand-painted drawings. Truthfully, they were nothing short of extraordinary. I was also interested in the feminist aspect of the Godey’s Lady’s Book; although it was published by a man, the magazine was edited by a woman, and contained many newfangled ideas and positive causes for women. Hale used her power and influence to create a regular section heading “Employment for Women,” which advocated for women in the workplace.

That being said, Godey’s Lady’s Book wasn’t entirely political. In fact, they tried to stay as far away from politics as possible. The magazine came under extreme scrutiny for avoiding discussing/denouncing slavery, and then for refusing to pick a side in the American Civil War. Because of this, Godey’s lost about a third of their subscribers, which they may as well have deserved. Both men and women did read the Godey’s Lady’s Book, and the desire to know more about the war was vital in the American people at this time.

In regards to the content of the Godey’s Lady’s Book, everything was relatively similar in nature and aimed towards women. The magazine is best known for the hand-tinted fashion plates, as I mentioned before, which were very expensive to produce. In 1859, it cost about $8,000 to color the fashion plates, so we have to assume the sales of the magazine were pretty flipping fantastic. In fact, it cost $105,200 to produce the entire darned book. The book also included patterns and measurements for a garment to be sewn at home, and a sheet of music for piano that provided the latest hit tunes.

In all honesty, I would love a magazine like this to make a comeback. With that being said, I would appreciate a magazine a little bit more politically woke and open to those discussions. I’m not too keen on discussing politics myself, but I do think it’s something magazines shouldn’t try to shy away from.

Perhaps the biggest reason I am fascinated with the magazine is the extraordinary element of women’s power and control in the publication industry. As a budding writer and communicator myself, I look at Sara Josepha Hale as a powerful role model and feminist figure in the 19th century. She’s also the writer of “Mary Had a Little Lamb,” which clearly makes her a woman of many talents. I can only aspire to be half the woman she was, and I mean that earnestly.

Tune in next week for another “Fashion History Friday”! Looking at my blog calendar, I just realized I have FIVE articles coming out next week, Monday through Friday! I didn’t even plan for five articles to fall in one week. Hopefully, you’ll enjoy reading them as much as I enjoy writing them.

Coming up next: The Best Vegan Spots to Eat in the Boston Area