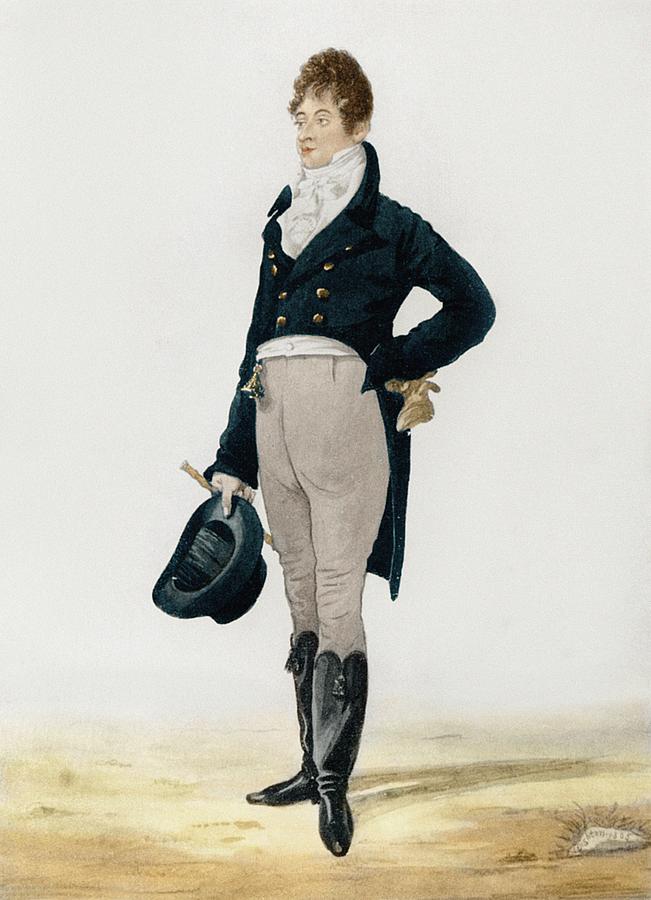 As I have mentioned before, I took a course titled “Fashion History” last semester in college. It was undoubtedly one of the most interesting classes I’ve taken to date, especially since it elaborated on some of the more concealed aspects of history. I believe that fashion and sociology are tightly wound and interchangeable, and dandies are no exception to this. It’s hard to objectively describe what exactly a dandy is, but man, are they interesting.

In short, a dandy referred to a guy in the 18th century who took meticulous care of his appearance and image. This extended beyond just looking like a beautifully groomed man; it also included refined language, importance on hobbies, and an aristocratic lifestyle. Although dandies strived to carry themselves as well-to-do, many of them emerged from middle-class backgrounds and families. They strived to lionize their aesthetic, and present an image of themselves to the world that portrayed poshness and elegance. It may sound arrogant, in a sense, for a human to put so much emphasis on their appearance or public image. He was, after all, supposed to embody a “perfect gentleman.” Perhaps (actually, definitely,) one of the most famous dandies of all time was Oscar Wilde. Not only did Wilde look the part of a dandy (fashionable and well-groomed), he also carried himself as a well-traveled intellectual with a flare for culture and literature. In a purely stereotypical manner, one might begin to wonder if a dandy was just an umbrella term for a closeted homosexual man, but this (for the most part, I think) isn’t true. A dandy, just like a metrosexual, is a heterosexual man who puts particular emphasis on his appearance.

Anywho, back to Wilde. He was something of a renaissance man, trying his hand at a variety of different activities. What Wilde is best known for, of course, is his Victorian-era playwrights and poetry. He also published a single novel, The Picture of Dorian Gray, in 1890.

With that being said, many of the most famous dandies in history were writers and literary figures. Many of the male figures in their works themselves also displayed dandyism, as they perhaps saw it as a way to subtly reveal their nonfiction selves in a fictional world. By the end of the 19th century, American dandies were called “dudes” (in case you were wondering where that slang originated from). Following the 19th century, some of the most notable believed dandies or “dudes” were Salvador Dalí, Andy Warhol and Quentin Crisp. They may not have worn tight body corsets like their earlier dandy brothers, but they continued to parade a sense of self-righteousness, high artistic taste, and sophisticated self-care. In 1951, author Albert Camus said this of the modern dandy:

“The dandy creates his own unity by aesthetic means. But it is an aesthetic of negation. “To live and die before a mirror”: that according to Baudelaire, was the dandy’s slogan. It is indeed a coherent slogan. The dandy is, by occupation, always in opposition. He can only exist by defiance. Up to now, man derived his coherence from the Creator. But from the moment that he consecrates his rupture from Him, he finds himself delivered over to the fleeting moment, to the passing days, and to wasted sensibility. Therefore he must take himself in hand. The dandy rallies his forces and creates a unity for himself by the very violence of his refusal. Profligate, like all people without a rule of life, he is only coherent as an actor. But an actor implies a public; the dandy can only play a part by setting himself up in opposition. He can only be sure of his own existence by finding it in the expression of others’ faces. Other people are his mirror. A mirror that quickly becomes clouded, it’s true, since human capacity for attention is limited. It must be ceaselessly stimulated, spurred on by provocation. The dandy, therefore, is always compelled to astonish. Singularity is his vocation, excess his way to perfection. Perpetually incomplete, always on the fringe of things, he compels others to create him, while denying their values. He plays at life because he is unable to live it.”

Today, the term “dandy” is no longer used to describe such a singular gentleman, but we’ve evolved to refer to modern dandies as metrosexuals, hipsters, and preppies. I’d love to hear your thoughts on this sociological evolution, some of your favorite dandies from history, etc. Thank you for joining me for this week’s Fashion History Friday!

Coming up next: Product Empties: All My Favorite Beauty Essentials