My Favorite Programs, Books, & Such by Sarah DesrocheJune 4, 2019

If you’ve stuck around for a while, you know that I love writing super thiccc, in-depth reviews about films I’ve grown up with. I’ve covered everything from Coraline to The Truman Show, and now, I’m super excited to talk about one of my favorite childhood movies: Ella Enchanted.

So, here’s the thing. Netflix RUDELY removed Ella Enchanted from the site without telling me, so now I can either rent it for $3.99, or try to hunt down my DVD copy at my dad’s house. Either way, you’re welcome in advance, and Netflix, please bring this movie back! 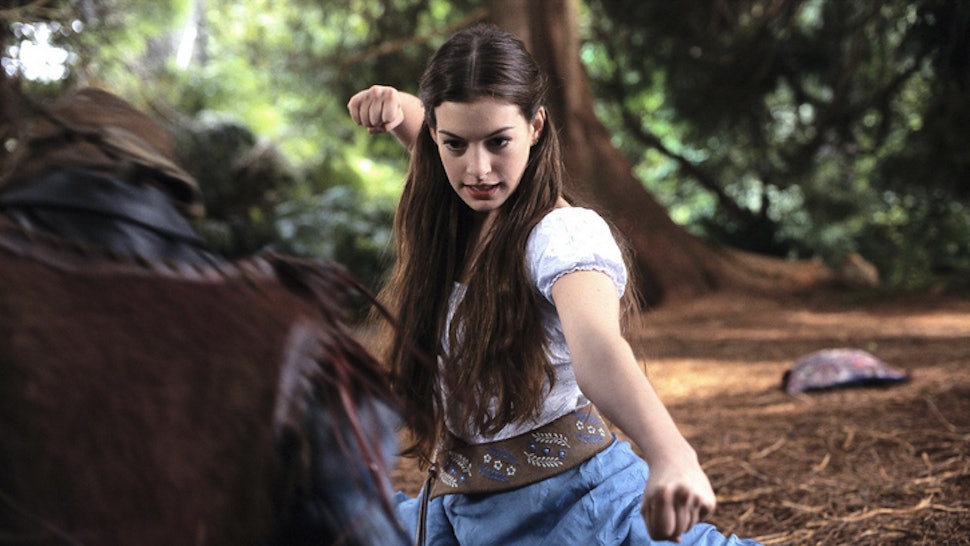 Before I even get into the plot of the movie, it’s important that you know how fantastic the cast/acting is. Anne Hathaway (once again) plays a perfect to-be princess, and Cary Elwes, for once, plays the villain in a fairytale. Who saw that coming?

Obviously, Ella Enchanted is a children’s fantasy movie, and the directors probably didn’t intend this film to be a satirical metaphor for systematic racism. I have always just been drawn to Ella as a character- a strong, educated female, who certainly doesn’t need no man, but can have one if she wants. And seriously, who wouldn’t want early 2000s Hugh Dancy? As a lesbian, even I can indeed agree that I want him.

I’m going to try to cover the plot as quickly as possible, which, by the way, is slightly different from the book. I’m pretty sure Ella is fourteen or fifteen in the book anyway, so…there’s that.

Anne Hathaway stars as Ella of Frell, which is a quaint little village in some sort of magical kingdom. There are humans, such as Ella and her family, but this universe also includes fairies, elves, giants, and ogres- many of whom are being enslaved and (racially?) oppressed.

Given this is a magical universe, it’s only natural that fairies can cast spells on humans. And for whatever reason, Ella is given a “gift” when she is born,  from a fairy named Lucinda: the “gift” of obedience. No matter what the task is, Ella has to do whatever she is told, even if it means committing robbery. Or, say, murder.

Oh, by the way, this movie is a musical! 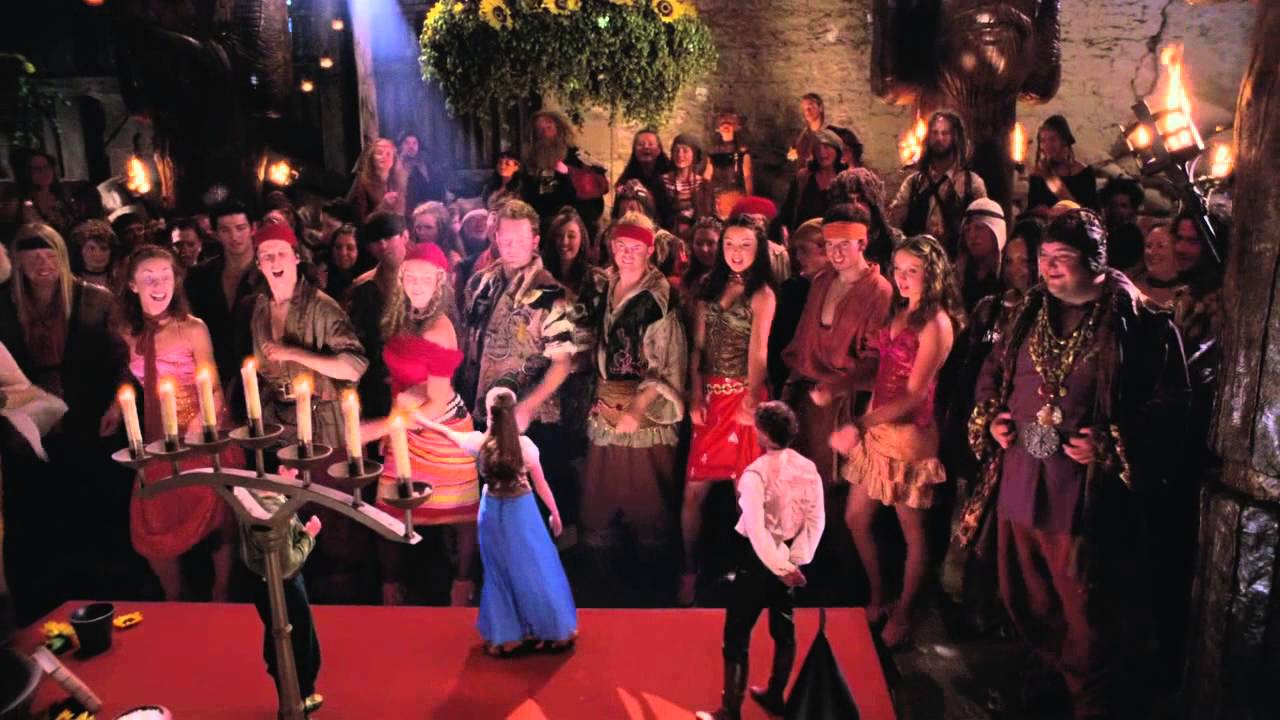 It’s not a gift to Ella, obviously. It’s a curse. And this movie covers Ella’s imperious journey to locate Lucinda and beg her to take back the curse, but of course, things don’t go quite to plan. Otherwise we wouldn’t have a movie, now would we?

The annoying thing is, Ella can’t tell anybody she has the curse. Ella promised her mother on her deathbed that she would never tell anybody about it, in fear that someone would use it against Ella. Which is valid and all, but how did she expect Ella to get through her entire life without telling anybody? That doesn’t seem too fair, either.

While on her journeys, Ella has a couple encounters with the 2000s-hot Prince Charmont, who is soon to become king after his coronation. The two quickly become friends, and eventually lovebirds after about… 24 hours. I mean, that is the recipe for a classic fairytale love story. Combine a prematurely dead mother, a romance that forms in less than a day, evil stepsisters, and boom, you have the perfect family film!

Even though Ella and Char do end up together, she kinda gives him a hard time throughout the movie. And honestly? I’m here for it. She hassles him relentlessly about his apparent uninterest in becoming king, and the newfound privilege he is going to be wielding. Like I said, the kingdom is plagued by unfair policies and prejudice against the creatures, and Char appears to be oblivious to all of it. I guess it’s not really his fault, because his uncle, Sir Edgar, is currently running the country.

At the beginning of the movie, we find out that Char’s dad, the original king, apparently died after he was attacked by ogres. The kingdom is now being run by Sir Edgar, who quickly gives off those creepy evil villain vibes. It’s Sir Edgar who has enforced unfair restrictions on the creatures; for example, he bans elves from all career paths, except for singing and dancing. This doesn’t sit well for Ella’s elf friend Slannen, who has dreams of becoming a lawyer. The restrictive laws put in place by Sir Edgar are not too far off from the laws we place on actual human beings in today’s day and age, especially when they are built on discrimination.

We also find out that the giants, who have always been peaceful, are being forced to work the fields as some sort of form of slave labor. You’d think that being giants and all, they’d be able to resist this, but I guess not. Hey, it’s just a movie.

Still, the themes of discrimination in this movie are in fact very real, especially when we learn about the giants. The kingdom is trying to essentially smother citizens with false rumors that the giants are vicious, rebellious beasts, while covering up the slave labor they are forcing the giants into. It just reminds me a lot of the scare tactics our own society uses against minorities- warning us that all people who are different than us must be lesser.

It is Ella who opens Char’s eyes up to these realities, who slowly falls in love with her and tells ol’ Uncle Edgar that he’s going to propose to Ella at his coronation ball. Unfortunately, Sir Edgar has caught wind from Ella’s evil stepsister about the curse, which, by the way, Ella has been unable to tell Char about. Sir Edgar tells Ella that she will stab Char in the heart with a dagger at the ball, and of course, she can’t get out of it due to her curse, no matter how much she loves Char. Also, Edgar throws in another wrench and commands Ella to tell no one about this plan.

So, great! That’s great. Not only does Ella have to murder the love of her life, but she also can’t tell anybody that Sir Edgar is the one who put her up to it. Edgar also tells Ella that the reason he’s doing this is because he wants to be king, and it was he, in fact, who killed Char’s father and blamed it on the ogres. Does this all make sense now?

Ella tries to get out of this by ordering Slannen to chain her up to a tree, which is actually pretty hilarious, considering she can’t tell Slannen why she has to do this. She then commands Slannen to go into the forest and rally as many fairytale creatures as he can find, in an effort to protect Char from Edgar. Unfortunately, things once again do not go to plan.

By some incredible and unbelievable coincidence, Lucinda the curse-giving fairy stumbles across Ella chained up to the tree. First of all, she refuses to take back the curse and free Ella from obedience, because she thinks that Ella is simply just ungrateful for the curse. Which, to be honest, I would be too if it meant I had to literally go stab Hugh Dancy in the back. Lucinda tells Ella that if she doesn’t like the gift, she has to get rid of it herself. Then, to make matters even worse, Lucinda unchains Ella from the tree, magically puts her in a fancy dress, and happily tells her to go attend the ball.

Ella unwillingly (and literally) drags herself to the ball, where Char takes her to the hall of mirrors and proposes to Ella. I’m not kidding when I say this scene was the most dramatic moment of my childhood, so if you haven’t seen it, go watch it RIGHT NOW.

As she physically fights back the curse to kill Char, she reflects on Lucinda’s words, and commands herself in the reflection of the mirror that she will no longer be obedient. She drops the dagger, and boom, she’s free from the curse. Turns out it was that simple all along!

Of course, when Char sees the dagger on the ground, he immediately realizes what was about to happen, and Sir Edgar and the guards sweep in to take Ella away. She gets locked away in some sort of dungeon-y cell, and Sir Edgar forbids Char from going to see her.

Meanwhile, Slannen has returned with some woodland fairytale friends, and once they find out Ella is in trouble, they storm the castle and rescue her from the dungeon. Then, they all sneak to Char’s coronation, because it’s no secret by now that Char’s life is in grave danger. Sure enough, Sir Edgar has poisoned Char’s crown, but right before Edgar is about to place it on his head, Ella and the gang bust through the doors and stop the coronation.

Real quick: wouldn’t folks find it a little suspicious that Char’s dad died years ago, and now, coincidentally, Char just happens to be poisoned by his crown? I’m a little surprised Edgar thought that would work, but hey, you have to do what you have to do to get the throne.

In the midst of fighting off the guards like a total badass, Ella explains everything to Char, from the curse she received at birth to Edgar’s plans to kill him. In a fit of frustration, Edgar admits that he did indeed kill Char’s father because the crown belongs to him, and, forgetting that the crown is poisoned…he puts it on his own head, and collapses.

The movie ends with Ella and Char kissing, him proposing again, and in the last scene, a musical montage of their wedding. What better way to end a movie with some Elton John?

They ride off into the sunset in a horse-drawn carriage, with Char being the new king, and Ella free of her curse. It’s safe to assume that all the discriminatory bans were lifted, the giants were freed, and Slannen was able to become a lawyer. And that’s more or less the entire movie, summed up as well as I can in three pages!

There are a handful of themes I’d like to delve into here- power, wealth, society, and class. Those with the most power and influence- Sir Edgar, and even Char, are directly responsible for the image of the underprivileged. Unfortunately, when power gets into the wrong hands, it’s easy for those in power to slander those who are “less than”, and funnel damaging rumors into the media. I don’t want to make this article super political, but I’m sure many of you will agree with me that certain political powerhouses tend to negatively portray immigrants, Mexicans, feminists, and members of the LGBT+ community. People like Donald Trump love to smear minorities, especially when it comes to fake news and outright lies about these vulnerable communities. And of course, people will believe him, like how people automatically believe Trump when he makes prejudice remarks about those who are different than him. In my opinion, it’s all a disturbing self-mission for him to gain even more power and control. 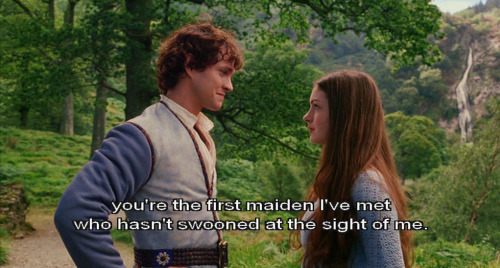 On a somewhat related note, this movie also touches on the theme of power, and how much control we actually have over our own lives. Ella is serious and strong-willed in her plight to protect her independence, and reminds me, in the 21st century, that I need to do the same. Ella is educated, strong, and willing to sacrifice her own safety just to know the truth. Like I’ve said many times, I know this is just a fairytale comedy movie, but Ella’s emotions and frustrations are very real things that women go through- the desire to be independent and respected.

Coming up next: My 2019 Summer Lookbook