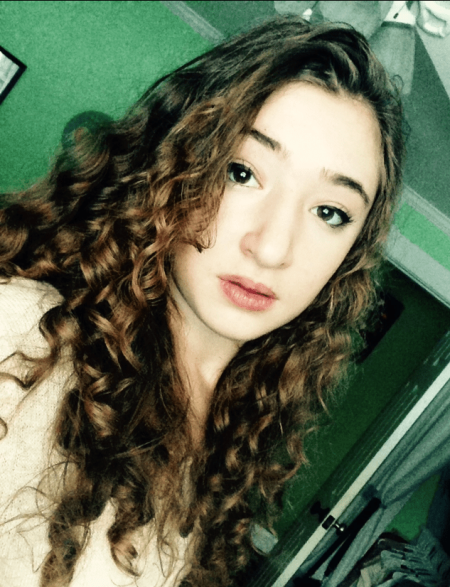 I started having my hair professionally dyed in middle school, and since then, having colorful hair is almost a part of my identity. It’s not an exciting color at the moment, but I am planning on dyeing it a new shade before the end of the year (so drop color suggestions below!). It’s going to be a lot of work trying to compile every color I’ve ever had, but I’m going to try my best. I hope you guys enjoy seeing these old pictures of me as well, because some of them are pretty cringey!

First of all, this is the natural texture and color of my hair (this picture is about five years old). My hair is pretty ashy in the winter- it even looks gray in some lights, but in the summer it becomes a warm, honey brown. I’ve also been #blessed with barrel curls, but now that I’ve processed my hair so much, it sadly doesn’t curl the way it used to. 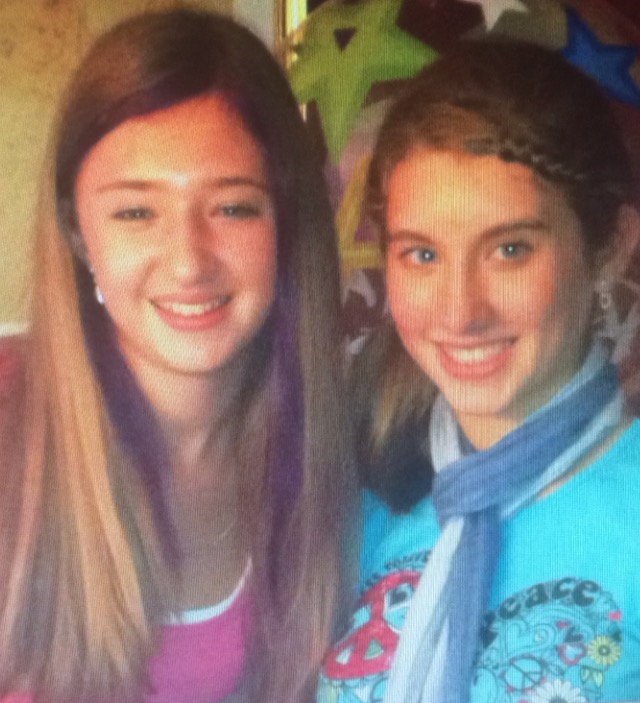 The first time I ever did anything exciting to my hair was in 8th grade, and this is the ONLY picture I have from it. My neighbor at the time was a licensed hairdresser, and she put these two purple streaks into the front of my hair. I was also really into straightening my hair at this time, because I hadn’t yet learned to love my natural curls. To complete the look, I (of course) had pencil-thin brows. I really thought I looked BOMB with that hair, though I suppose in retrospect it wasn’t that bad. I was also really into wearing teal eyeshadow and winging my liner in 8th grade, but it’s hard to tell from this picture. Maybe someday I’ll recreate my old middle school makeup routine, so you can have an idea of what I might have looked like. 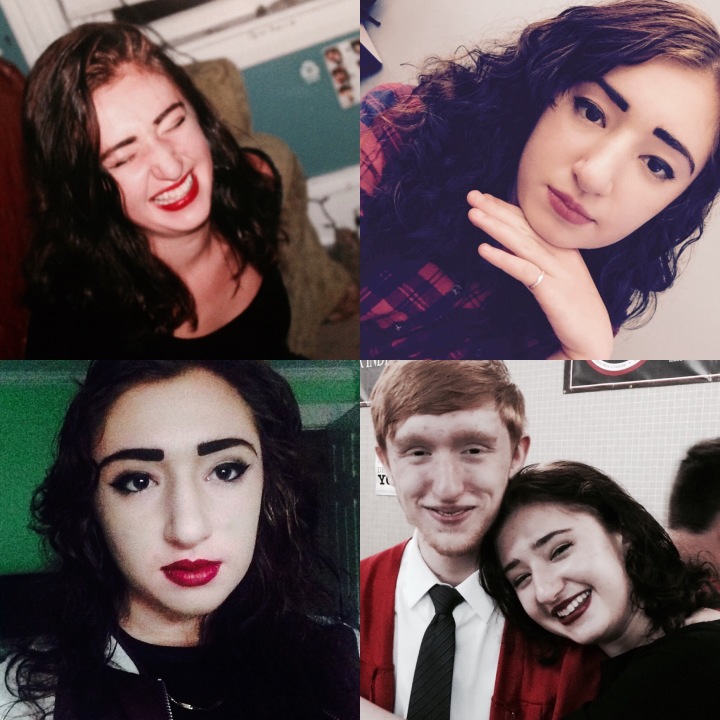 The winter of my freshman year is when my mom finally let me dye my whole head, but only a natural color. I decided to go with a dark brown, which did look lovely at the time, but the light-brown roots growing in was NOT a look. I was also really into penciling my eyebrows super dark, as this was well before “instagram brows” really took off. The bottom right picture is me at my brother’s graduation, and you can really see how different we look. Looking back, I really liked this color on me. I dyed it dark brown for a while, too, so I have a ton of pictures from this age.

In April of my sophomore year, I decided I wanted to dye my hair a light, minty teal. This was around the time Kylie Jenner wore a lot of wigs, so I remember being really inspired by her. I will say, this process DESTROYED my hair. Dyeing my hair dark brown for so long, and then suddenly aggressively bleaching it was NOT good for it, but it did look cute. Teal hair, to this day, is my favorite color I’ve ever had. As you can see, my curls lost their bounce and turned into waves during this time. My hair literally felt like straw, but I LOVED this look. Summer 2016 was a lot of fun for me; I had a solid group of friends, and I was dating a popular football player (this was obviously way before I came out as a lesbian). I felt really pretty in these pictures. 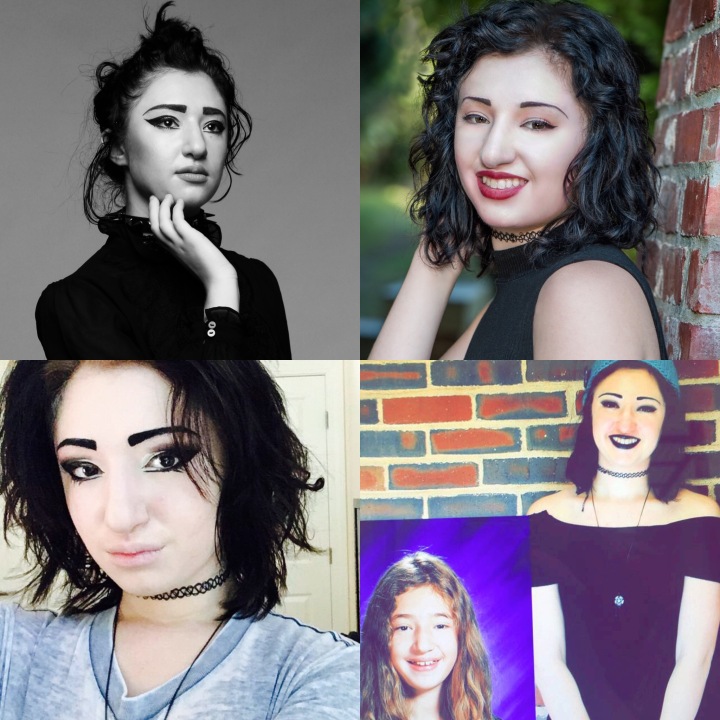 The next color I dyed my hair was jet-black, because I was really into the gothic subculture and icons like Siouxsie Sioux. My life had changed a lot from the summer, because I lost all of the things things that had made it fun. I remember the only person who felt like a true friend was Eli, and to this day, we are still good friends. You’ll notice Eli in a lot of old pictures with me, because he has been my bestie and my rock since 2015. I remember one time I was on a beach date that I HATED being on, so I discreetly called Eli and he came to pick me up. I snuck away from the date (so mean, I know), and we went to McDonalds to get milkshakes. That was a really good day. Anyway, back to my hair. Adding black dye over the bleach actually strengthened my hair, and I managed to get some of my natural curl back. You can see my natural texture in my senior portrait, top right. Bottom right is my superlative picture- I won “most changed since 8th grade.”

I don’t have any good pictures from this time, but between December of 2016 and April of the following year, I kept my hair short and black. This was around the time I began to think more in depth about my sexuality -my boyfriend at the time was bisexual, and I wondered if I was, too. I was in that relationship from October of 2016 to April of 2017. One of the reasons I chopped my hair off in April was because I was so distraught over the end of that relationship- I did NOT see it coming at all, and I definitely did not handle it well. Cutting off all my hair was very liberating for me. The months after that were a blur of chaos and depression, but eventually, I did come out of it. This all took place after I had been diagnosed with PMDD, so at least I knew my hormones partly contributed to it. I got on escitalopram (Lexapro) in 2016, and stayed on it until about a month ago. 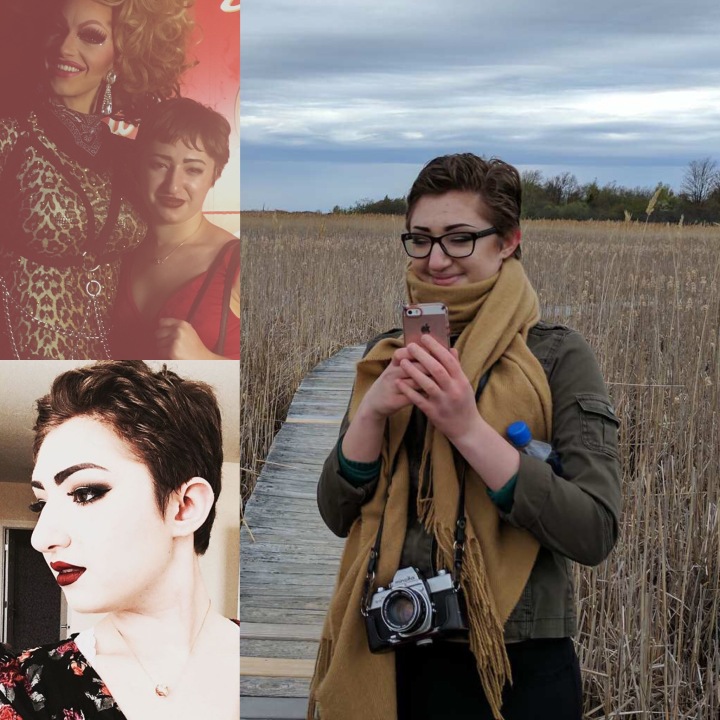 Like I said, I chopped off all of my hair after that really hard breakup (but honestly, who hasn’t done something drastic to their hair after a breakup?). All of the black had grown out by this point, but I didn’t keep it brown for long. Within this one-month time block, I took a trip to Minnesota to see Eli, as that’s where he attends college. The top left picture is me at a gay club called The Gay 90s, which is located in downtown Minneapolis. We had a marvelous time together that weekend, and I have so many fond memories. We also visited an IKEA store, and I remember Eli made me laugh so hard, I actually bruised one of my ribs from trying to hold it in. It was a really great time. 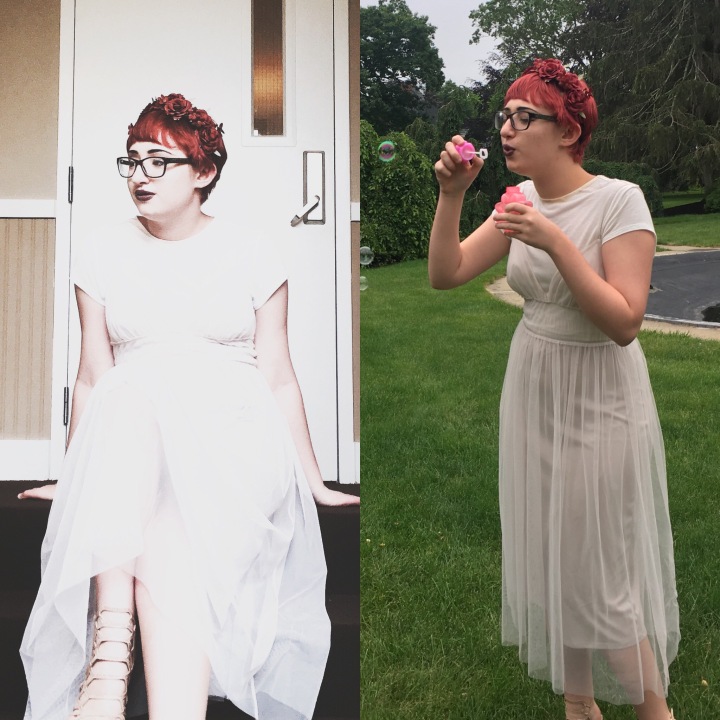 Around the time I graduated from high school, I dyed my hair a bright, fuchsia pink. I actually didn’t love it as much as I thought I would, and I won’t lie, it faded to a really ugly color. By the end of the summer, it was kind of a brassy orange color, and I looked just like Annie the orphan. I will say though, my hair was super curly and healthy during this time. Look at how amazing those curls were! This was my last summer home before college, and I spent a lot of time with Eli. Sadly, that was the last summer he came home for break, and now he mainly stays in Minnesota full-time. 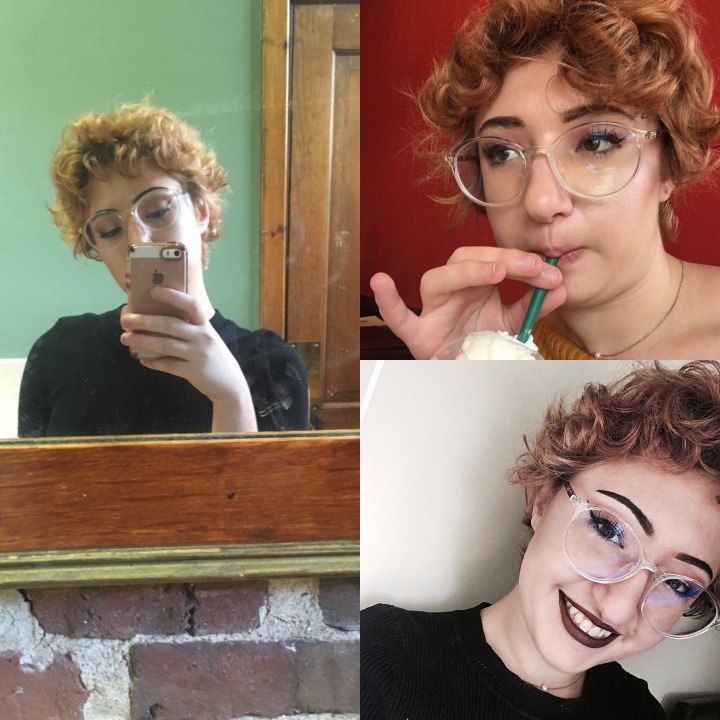 The WORST MISTAKE I EVER MADE came in October, when I let a friend of mine dye my hair dark blue. She actually did a really good job, but the dye was not permanent and it faded to a horrendous poopy color after just a few weeks. I didn’t have a chance to get into a salon until January, and thankfully, I don’t have many pictures of my hair during this time. This was also around the time I was starting to become comfortable with the fact that I liked girls, and I went on a lot of dates with beautiful ladies around this time. I also had a really rich friend around this time, and she always took me out to Target and the mall and The Cheesecake Factory around this time. I know that probably doesn’t sound too exciting, but when you spend all your time on an isolated college campus, it’s so fun to get out and do things. I was wearing a lot of button-downs and sweaters around this time, and she always joked that I looked like Ellen DeGeneres.

Like I said, I was able to get to a salon over my winter recession. This is around the time I started my blog and started doing my pinup thing, which lasted for a REALLY long time (about a year, as you can see). I loved wearing those vintage dresses and putting my hair in victory rolls, and I think that I looked really good during this period. My medication was pretty regulated by this time, and I felt confident and happy. I’m sure my happiness is visible from these pictures, and I love to look back and them. I’ve still kept a lot of the clothes, and sometimes I like to take them out and reflect on that happy summer I spent in petticoats and heels.

Last April, after really missing my teal hair (because, like I said, it’s my favorite), I went to a salon and had it dyed again. It felt much healthier this time, because my hair had been left alone for so long, and the bleach wasn’t as damaging. I had a lot of fun doing avante-garde makeup looks at this time, because I was still shaving off my eyebrows pretty regularly. I was still kind of keeping up the vintage thing, but then my style became thotty for a hot minute, and then, my current style, futch. I more or less had my homosexual awakening at this time, and started getting into a lot of gay musicians, such as k.d. Lang and LP. This heavily influenced my next hair change, as you are about to see. 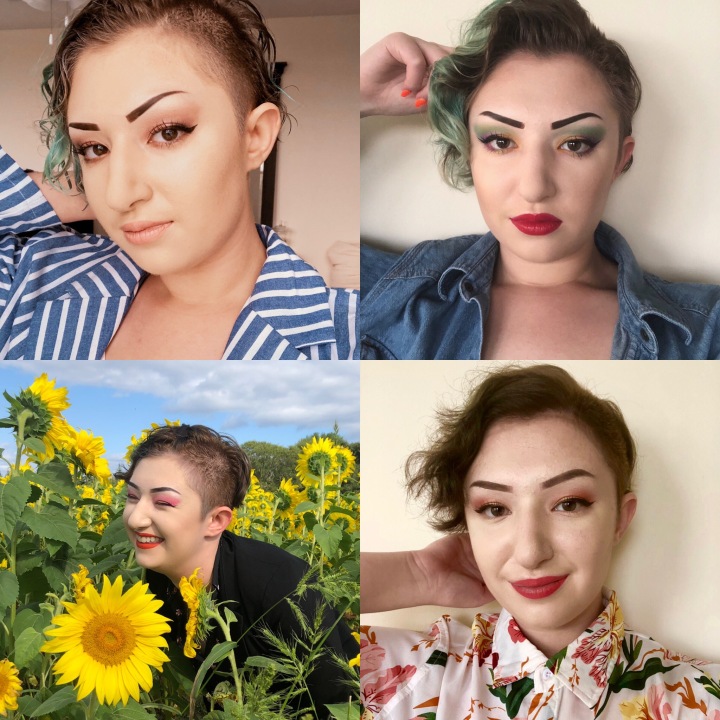 The bottom right before is the most updated picture I have of myself. I grew out my eyebrows again, and cut my hair really short (featuring a really dope undercut, which I’m obsessed with). I still love doing crazy makeup looks, but I don’t have as much time anymore, being a senior in college. I also could only bring so much makeup to college, and sadly, I had to leave a lot of my favorite things back home. I’m feeling pretty good right now- it was a challenging summer, but I’m adjusting really well to my final school year. I’ll probably dye my hair another crazy color before the end of the year, but I haven’t decided which one yet. I haven’t done a bright yellow yet, so maybe that’s what’s next on the agenda. 😉

Coming up next: Yes, Your Mental Health is More Important Than a Good Grade