$370,000 Was Raised for the Lisa Frank Kickstarter. Two Years Later, Backers Have Still Received Nothing

By now, the climactic nature of this story has long passed, but it’s not old news. You may have originally heard about this story from Tea Spill, a YouTube channel covering beauty-community-related drama. She has a lot of great information about this story, so I highly recommend checking out her video! If you have not seen the video, allow me to give you a little bit of backstory about how this mess started.

First of all, what is Kickstarter? Kickstarter is a campaign platform that allows creators/artists to find backers and support, so that they can have the resources to make their dreams a reality. Backers can choose which projects they would like to contribute to, and in turn, the creators can reward their backers with gifts, perks, or other privileges once the project is fully funded and completed. It’s a great system, and many creators have had enormous success using this platform.

Unfortunately, not everyone has a great experience on Kickstarter- including the backers. Sometimes, if a project falls through, backers are left with a thinner wallet and no completed project. You would expect the project at fault to refund all of the money, but sadly, that’s not always what happens.

Before I get too ahead of myself, let me first explain what the Lisa Frank Kickstarter is (I will also include a link to the page, if you’d like to do more research yourself). This project was supposed to be a collaboration between indie makeup brand Glamour Dolls and iconic artist Lisa Frank, who many of you 90s babies will probably remember. In theory, I think a Lisa Frank makeup line is a creative and fantastic idea. If this project had been better executed, I truly believe it would have been a huge success.

Many other people seemed to agree with that notion, because the campaign to fund a Lisa Frank x Glamour Dolls makeup collection garnered over 5,935 backers and raised over $370,000. That’s right, $370,000 was raised by good-intentioned folks who loved the idea of this project, and of course, they were promised early access to the products before anyone else. Depending on how much you donated, you could get anything from a free digital background to the ENTIRE collection, so people were pretty stoked. The campaign was launched in February of 2017, and was set to be finished that September.

Well, September came and went. No products were received. Updates from the company became more and more sparse.

Again, if you want all the juicy details, watch Tea Spill’s video. I’m just here to give you the highlights and my current thoughts on the situation. In a nutshell, this is what happened: as the updates became fewer and fewer, backers (obviously) became more and more concerned. Products were not being developed at the original planned pace, which is normal, but this was at a WHOLE ‘nother level of disorganization. By the fall, they had only developed one product: a bronzer. The big kicker came in October when random people (who hadn’t even backed the project) started receiving the bronzer in their Ipsy bags. Yes, the backers have STILL not received any of the products they were promised, but random Ipsy subscribers were finding the product in their bags. Seems unfair, right?

October comes and goes. Backers have still not received any of the products they were promised for their donations. Then, some of the products started showing up in Hot Topic stores.

As you can probably imagine, patience was running thin by this time and backers were starting to get pretty pissed. I mean, I would be to. They are literally the ones who funded this project with the promise of having early access to the products. Now, the general public was receiving products before the funders? Yeah, it’s all sorts of messed up. Glamour Dolls released some sort of bullshit statement about “retail partner pricing”, and how it was supposed to be a “surprise”, but that obviously didn’t solve anything. Even more shady, there was a huge hole in Glamour Doll’s statement. At the beginning of the campaign, they sate “We started these products from scratch with you,” but what Glamour Dolls is saying is that the products were already developed before Kickstarter? I mean, come on. Make up your mind. Or should I say, makeup your mind.

There are lots of other really juicy side stories that emerged at this time, including the fact that Glamour Dolls may have stole some designs and molds from other companies, but I won’t open that can of worms right now. We’ve already got enough on our plate as it is.

Another promise that fell through had to do with the “Digital Background” promised to backers who pledged $5. Well, Glamour Dolls ended up scratching that idea, and instead elected to give backers an AUTOGRAPHED, VINTAGE Lisa Frank postcard.

Except, lo and behold, it wasn’t a vintage postcard. It also wasn’t really autographed, it was just the same signature photocopied onto hundreds of postcards. So much for “total transparency”, Glamour Dolls. Many backers also received their postcards bent and creased, which is frustrating, to say the least.

And yes, the backers who pledged $100+ have still not received ANY products at this point. Anyone who donated $100+ was promised the entire collection, and now, months later, all they get is, what, a bent postcard and maybe a bronzer?

Anyway, after the Ipsy and the Hot Topic fiasco, communication between Glamour Dolls and the backers became more or less nonexistent. I’m serious. The last update from Glamour Dolls was more than a year ago. To this day, TWO YEARS LATER, backers who pledged as much as $200 have still not received anything. Glamour Dolls even deleted their instagram account, and upon further research, both of the founders of the company have altered their LinkedIn profiles, so it’s like the company never existed. Thousands and thousands of people who pledged over $300,000 are now the victims of fraud, and there’s nothing being done about it.

That’s the biggest reason why I wanted to write this article. In October of 2019, there is still no update, no refunds, no action. This is downright wrong. Even though I was never involved in this project, I really sympathize with those backers. And Glamour Dolls is basically a walking clown show at this point.

From my understanding, Kickstarter itself is not held liable for this fiasco because it’s out of their control at this point. The only person(s) who can really be held liable is Glamour Dolls, and obviously, they’ve completely wiped themselves from the map. Although it’s frustrating for the kickstarters (and quite literally fraudulent), there are still things we can do to support them. One thing you can do is select “Report Project to Kickstarter” at the bottom of the campaign page. 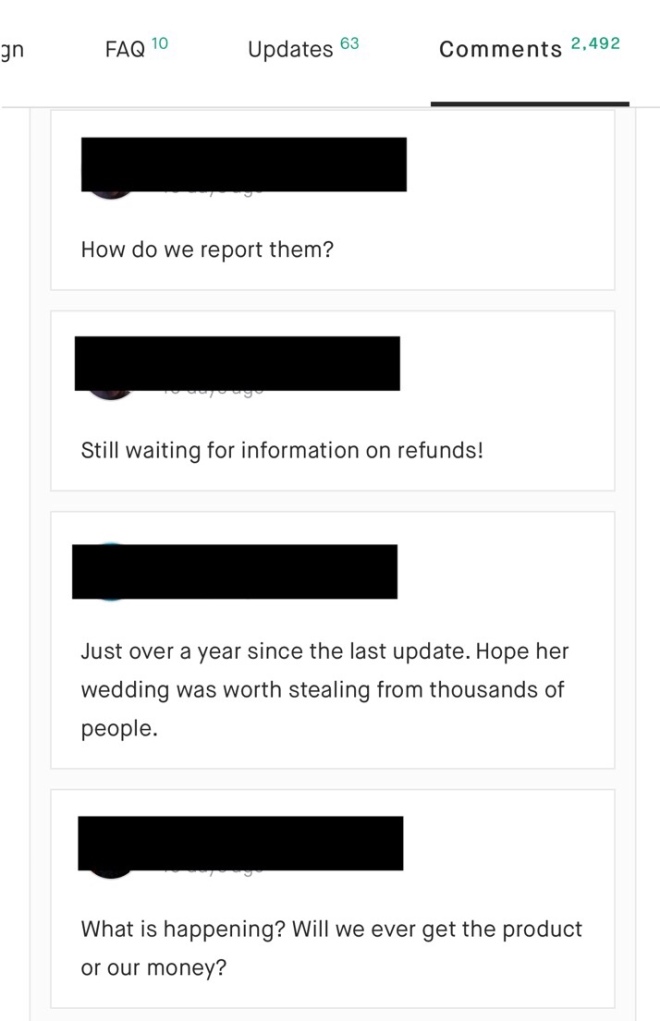 Interesting side note: Kickstarter still lists the Lisa Frank project as one of the “Projects They Love.” Really, Kickstarter? You may be alone in that sentiment.

I’ll link that below if you want to help support the backers. I suppose you could also report Glamour Dolls to the FTC, but I won’t say you’re guaranteed to hear back from them any time soon. Lastly, spread the word! The more we pressure Glamour Dolls/Kickstarter to respond to the issue, the more hope there is that these victims will receive their refunds. Remember, some people pledged up to TWO HUNDRED dollars, and they’re still living in the dark. As a broke college student, I’d be pissed if this happened to me.

Also, please share this article and Tea Spill’s if you are interested in this story. I truly believe this story is not getting the negative coverage it deserves.

Coming up next: What’s in Season in October?